Tests of control are tests to obtain audit evidence about the effective operation of the accounting and internal control systems, that is, that properly designed controls identified in the preliminary assessment of control risk exist in fact and have operated effectively throughout the relevant period.

Substantive procedures are tests to obtain audit evidence to detect material misstatements in the financial statements. They are generally of two types:

The types of substantive tests carried out to obtain evidence about various financial statement assertions are outlined in the table below.

A general assumption that audit firm have is that companies overstate assets and understate liabilities. It also has to do with double entry system e.g. creditors and purchases. If one is correct then most likely the other is correct also.

The techniques used are:

The tests of controls in the purchases system will be based around:
a) Buying (authorization)
b) Goods inwards (custody)
c) Procurement (recording) 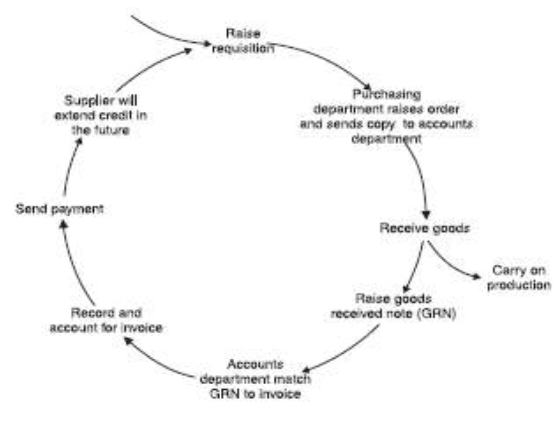 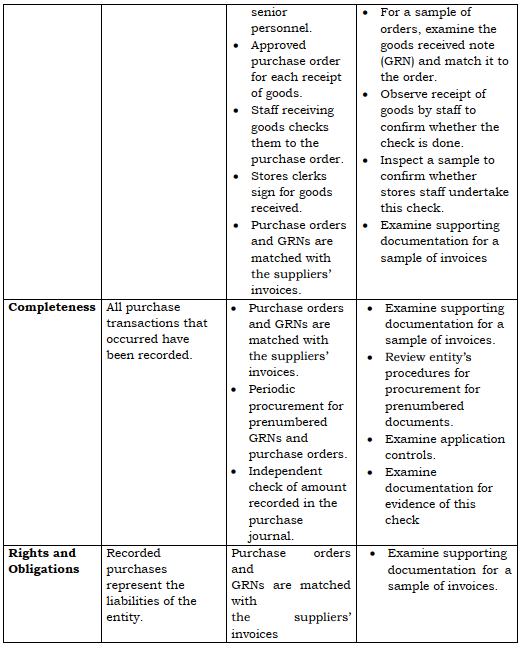 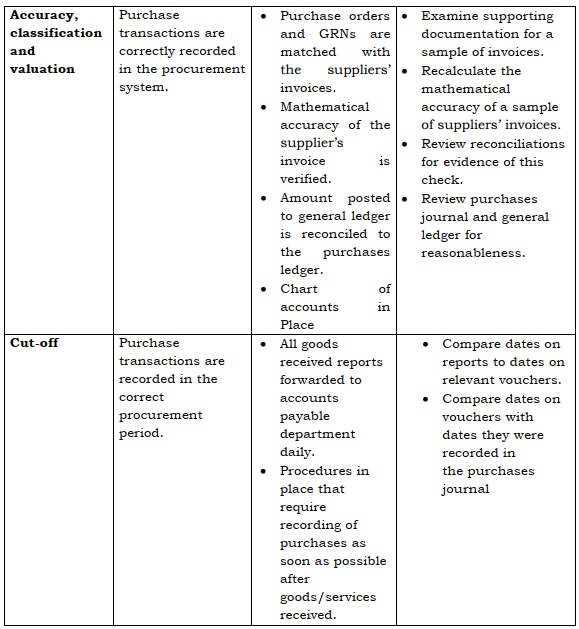 (a) Controls over the standing data file containing suppliers’ details will include the following.

(i) All amendments/additions/deletions to the data should be authorised by a responsible official. A standard form should be used for such changes.
(ii) The amendment forms should be input in batches (with different types of change in different batches), sequentially numbered and recorded in a batch control book so that any gaps in the batch numbers can be investigated. The output produced by the computer should be checked to the input.
(iii) A listing of all such adjustments should automatically be produced by the computer and reviewed by a responsible official, who should also check authorization.
(iv) A listing of suppliers’ accounts on which there has been no movement for a specified period should be produced to allow decisions to be made about possible deletions, thus ensuring that the standing data is current. The buying department manager might also recommend account closures on a periodic basis.
(v) Users should be controlled by use of passwords. This can also be used as a method of controlling those who can amend data.
(vi) Periodic listings of standing data should be produced in order to verify details (for example addresses) with suppliers’ documents (invoices/ statements).

(b) The input of authorized purchase invoices and credit notes should be controlled in the following ways.

(i) Authorization should be evidenced by the signature of the responsible official such as the Chief Accountant. In addition, the invoice or credit note should show initials to demonstrate that the details have been agreed: to a signed GRN; to a purchase order; to a price list; for additions and extensions.
(ii) There should be adequate segregation of responsibilities between the posting function, inventory custody and receipt, payment of suppliers and changes to standing data.
(iii) Input should be restricted by use of passwords linked to the relevant site number.
(iv) A batch control book should be maintained, recording batches in number sequence. Invoices should be input in batches using pre-numbered batch control sheets. The manually produced invoice total on the batch control sheet should be agreed to the computer generated total. Credit notes and invoices should be input in separate batches to avoid one being posted as the other.
(v) A program should check calculation of sales tax at standard rate and total of invoice. Nonstandard sales tax rates should be highlighted.

Inventory controls are designed to ensure safe custody. Such controls include restriction of access, documentation and authorization of movements, regular independent inventory counting and review of inventory condition.

The inventory system can be very important in an audit because of the high value of inventory or the complexity of its audit. It is closely connected with the sales and purchases systems covered in the previous sections.

There are three possible approaches to the audit of inventory and the approach chosen depends on the control in system in place over inventory.

(a) If the entity has a perpetual inventory system in place where inventory is counted continuously throughout the year, and therefore a year-end count is not undertaken, a controls-based approach can be taken if control risk has been assessed as low.
(b) If an inventory count is to be undertaken near the year-end and adjusted by perpetual inventory records for the year-end value, this approach also requires control risk to be assessed as low.
(c) If inventory quantities will be determined by an inventory count at the year- end date, a substantive approach is taken and no reliance is placed on controls. Control objectives, controls and tests of controls

Most of the controls testing relating to inventory has been covered in the purchase and sales testing outlined in sections 1 and 2. Auditors will primarily be concerned at this stage with ensuring that the business keeps track of inventory. 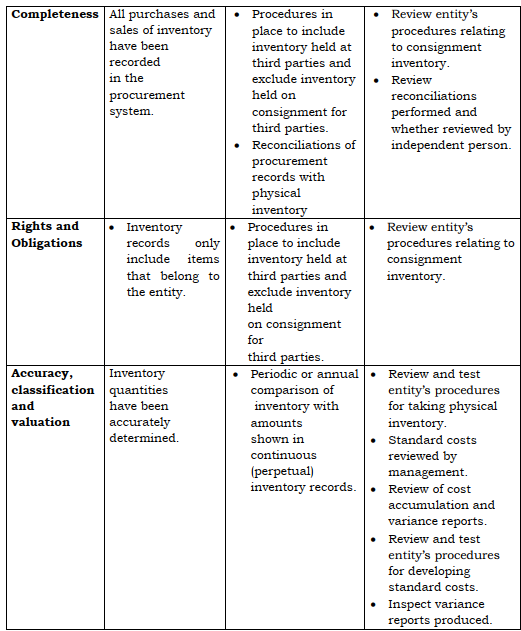 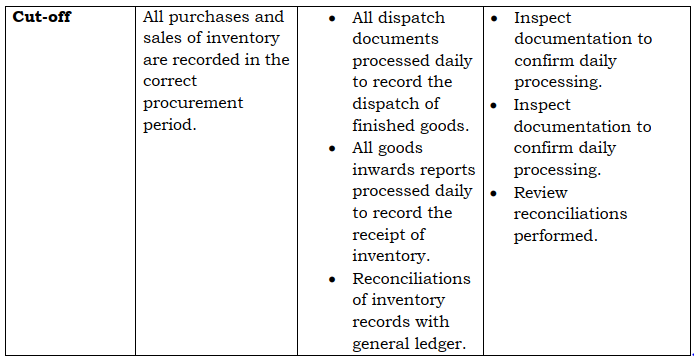